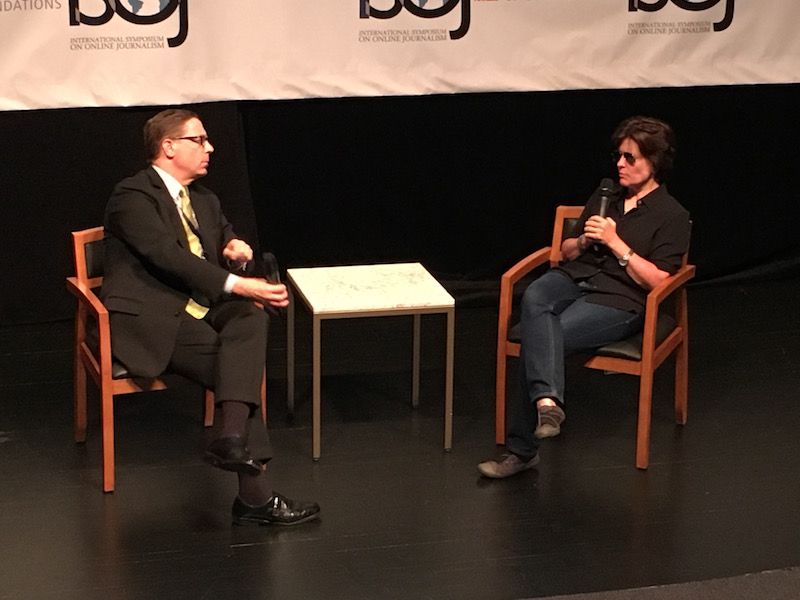 I was live tweeting day 2 of this year's International Symposium on Online Journalism (#ISOJ) - a little chaotic, but here are my live tweets. Big takeaway: there was little about anxiety over legacy business model failure, more focus on how things are working - emphasizing that they're working. This is a great time for news content and delivery innovation. The tweets: Hearing from women digital news leaders at a special breakfast session. Waking up & smelling the coffee...! #isoj #isoj2016

"Media outlets are saying 'we don't know where the women are.' Elmira Bayrasli says "we do" (Foreign Policy Interrupted) #isoj #isoj2016

https://t.co/2d3TdtZOBs founded out of necessity as a news and information source for Cubans. Not controlled by government. #isoj

You work as an independent person (contractor), allowed for some professions, not for journalists but for typists - so became typists. #isoj

14ymedio includes a market section listing the most current food prices throughout Cuba - "we have our own Dow Jones." #isoj

By generating simple price list, showed that a worker in Havana has to work 2 days to pay for a pound of boneless pork. @yoanisanchez #isoj

When @yoanisanchez tells her mother they have to work two days for a pound of pork, they realize something has to change. #isoj

.@yoanisanchez says "we have a digital newspaper but are not connected ourselves." Creativity leads to use of simple tools. #isoj

For people not connected, 14ymedio is distributed via flash drives. Also via SMS and email. #isoj

When Cuba is a free and democratic country, we'll have to build a monument to the flash drive! @yoanisanchez #isoj

RT @robquig: .@yoanisanchez says she wants to come to Austin and give a class on tweeting in difficult circumstances. Please do!! Open invi…

Official discourse depends on having an enemy. You have to have Goliath for David to make sense. @yoanisanchez #isoj

In Cuba, the government undid civil society, cut the threads of the social fabric. @yoanisanchez #isoj

You can't protest in Cuba unless the government calls for the protest. @yoanisanchez #isoj

RT @ellierosetx: Obama is young, has a family, active. It was good for Cubans to see that, compared to elusive Castro. #ISOJ

75% of all smartphone users are using messaging apps. @clockwerks #isoj

Howdy asks scrum questions: What did you do yesterday? What will you do today? Do you have blockers? #isoj

RT @MaryCaitlinByrd "It's a Wild West, blue sky opportunity to figure out what's going on" -- @benbrown on bots #ISOJ

Election bot at @nytimes was created as a bot you could add you your Slack. via @_alastair #isoj

NYT added a great way to ask questions using wit.ai (https://t.co/7MGGmbiTJb), but the volume of questions got out of hand. #isoj

RT @MaryCaitlinByrd - bot "doesn't have context," says @_alastair It can't read the messages, the conversations happening around it #ISOJ

Shut the election bot down over UX issues related to volume, subjectivity, etc. Hard to make it satisfying for user. #isoj

Wondering where bots go when they die? #isoj

You should be racking your brain for new ways to delight your users. @rebeccajharris #isoj

Notifications generally associated with breaking news, but you could include more info on the lock screen for richer experience. #isoj

RT @dskok .@QZ app dev started with a question: @zseward "Could we provide more than just standard alerts on the lock screen?" #ISOJ

Once the Quartz app framework was clear, next step was to figure out the content, including paths through storires. @zseward #isoj

Simplified and reconstructed the experience of the Quartz app. Narrowing options made for more enjoyable UX. @zseward #isoj

RT @audreyabrowning Another roadblock for @qz beginnings was also make the app usable for news creators – not just users. #ISOJ

Figuring out what is good about a conversational interface? Not a news article, but an experience. @zseward #isoj

"You should demand to know who's behind the bots" - @clockwerks. #isoj

.@rebeccajharris: democracy requires an informed society; that's the purpose of journalism. Bots can do that conversationally. #isoj

RT @audreyabrowning .@benbrown: How do the voices behind the bot evolve? Interesting and unanswered questions. #ISOJ

A bot is only as smart as the humans behind it. Don't worry about the robot overlords. #isoj

.@benbrown on the importance of having 2-3 focused and clear goals for your user. #isoj

.@benbrown says there will be a proliferation of bot authoring tools, so it will be easier to create them without tech background. #isoj

Some digital native media orgs are repositioning themselves to be original content generators. #isoj

Will nascent media orgs mimic tradtional media in order to survive in an uncertain market? #isoj

Toward Omnipresent Journalism: A Case Study of the Real-Time Coverage of the San Antonio Spurs 2014 NBA Championship Game - yes! #isoj

Omnipresent journalism a new model? What are the implications for the news industry? #isoj

Omnipresent journalism: go (mobile) where the readers are, multitask. #isoj

Journalism has to provide a public forum? Are comments where this is happening? #isoj

Idea of the Spiral of Silence persists. Most people never comment, some rarely; ony a few comment often. #isoj

If people experience a sense of community, they're less likely to say that anonymity is important to them. #isoj

Diary of a Mad Journalist via @karaswisher, who @evanasmith says is most respected, trusted, and feared journalist in Silicon Valley. #isoj

The real title of @karaswisher speech, she slides: "The Internet Really Needs to Shut the F*#ck Up!" #isoj

The next age of computing is going to be about feelings and NOT technology. @karaswisher #isoj

.@karaswisher welcomes us to the Human Age. #isoj

RT @nohacefaltap “Google glass is the only thing Silicon Valley made that made supermodels unfuckable”, says @karaswisher #ISOJ

Google Glass doesn't work because it doesn't react to you - you have to react to it. @karaswisher #isoj

"It will be about brand." You have to stick to what you're supposed to be. @karaswisher #isoj

The future will be geolocated! @karaswisher (The phones in your pockets are literally stocking devices.) #isoj

Always on! Continuous partial attention, it will never turn off. @karaswisher #isoj

You have to be genuine and who you are online. "On the Internet, everybody knows you're a dog." @karaswisher #isoj

"I use Twitter, and it's really me doing it." @karaswisher #isoj

Your tech will always be transmitting. There's nothing that people don't communicate. @karaswisher #isoj

"It will be about what you're wearabling." Wearables are important, though not quite right yet. #isoj

"Wearables will be useful when they start giving you excellent advice." @karaswisher #isoj

You have to expose yourself. Don't be shy! @karaswisher #isoj

"It will be political." Gov't is usually Internet-idiotic, but now tech is getting political. Yow. @karaswisher #isoj

"I think Zuckerberg is really innovative and interesting." @karaswisher #isoj

Mark Zuckerberg "is less of a narcissist than the others." @karaswisher #isoj

RT @Just_es_36 @karaswisher is keeping the crowd laughing through her thoughts. A fantastic person!

RT @ylichterman Swisher on Bezos' stewardship of The Washington Post: "It's like a comma on his money. He doesn't care." #ISOJ

Buzzfeed celebrates their viral-ness and that's what pisses people off. @karaswisher #isoj

WSJ was always denigrating blogs, like it was the clap! @karaswisher #isoj

"There's never been a greater time for content!" @karaswisher #isoj

"It's a journalist's nature to be depressed about things." @karaswisher #isoj

The economic inequality in San Francisco has got really disturbing... important to address. @karaswisher #karaswisherformayor #isoj

.@karaswisher says @clockwerks "planted a thing in my neck, I don't know what it was..." #isoj

.@clockwerks is one of the most thoughtful people about how media interacts with technology; he wants to be a partner. @karaswisher #isoj

.@recode is moving from Wordpress to the Vox platform, Unison. #isoj

Talking about Nasha Niva, a publication in Belarus, a country described as a 'digital dictatorship.' #isoj

Wanted Nuba Reports https://t.co/h0e0SRtI3t to be fast, edgy, innovative. Invested in video for its power and value on the ground. #isoj

RT @ellierosetx Laughter is the best medicine, even against hatred and social apathy. #ISOJ

RT @DaveLaFontaine: #ISOJ Putin as SuperMario in game that mocks how he is always late. Brilliant! https://t.co/MMvKynbh58

Can we monetize VR? Will it be affordable and accessible? #isoj

With immersive VR, people can jump into stories. @pachecod #isoj

Four flavors of #VR, starting with "casual VR" such as Google Cardboard. #isoj

AR and "mixed reality" is the next thing: Microsoft HoloLens and Magic Leap. #isoj

Volumetric VR (walk around VR) allows you to move around, increases your sense of immersion. @jpallot1 #isoj

Photogrammetry vs videogrammetry: soon will be able to make much more realistic #VR CGI. #isoj

Other ideal use of volumetric #VR: recreating past events where no footage exists. #isoj

What does animation afford you that realism doesn't? @CarlaBorras #isoj

Affordance of animation: you can defy the laws of physics. @CarlaBorras #isoj

#VR challenge of narrative focus in a 360 world. @CarlaBorras #isoj

Demo of #VR tool UT Journalism Dept is developing with a multidisciplinary team in a VR Lab.@rbbrenner https://t.co/Oelz7MPZhm #isoj

We're at a point where it's important to start talking about standards and ethics of #VR. @tjrkent #isoj

Will there be a space and a market for objectivity in #VR news, or will there only be room for tools for persuasion? @tjrkent #isoj

How accurate will #VR be? With 2D image sources, may be missing some precision in the imagery. @tjrkent #isoj

How might we convey that we don't know the absolute reality of a scene? E.g. blurring images where detail is missing. @tjrkent #isoj

RT @pbutler50 Science of VR on brains is very young - we don't know how traumatic experiences will affect the user. @tjrkent #ISOJ

We're soon going to have a digital VR depiction of the whole planet. @jpallot1 #isoj

How do we manage griefers in virtual reality environments like Minecraft? #isoj

RT @audreyabrowning Jamie Pallot: How is the next generation going to get their news? That's the big question. #ISOJ

RT @jovrnalism #jpallot1"We are about to enter the metaverse. I say that with a straight face." #ISOJ Photo: Evan Smith interviews Kara Swisher at the International Symposium on Online Journalism. By Jon Lebkowsky.